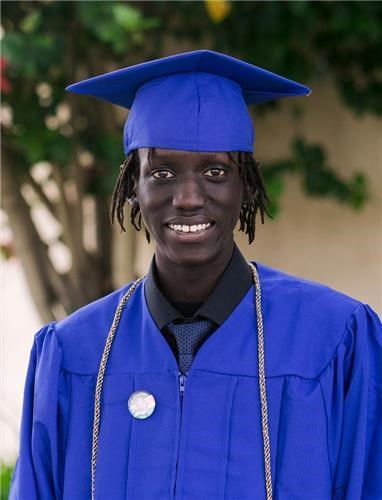 Jok Jok's Memorial Scholarship was started by Joseph Jok to commemorate his son, Jok "Michael" Jok, whose life was cut short on the night of Saturday, February 27, 2021. He suffered a severe head injury due to a hit and run accident. Upon arrival at the hospital, the neurologist determined that surgery could not reverse the course of the brain death that had already begun.

Michael was born in San Diego on October 4, 2002, the son of parents who had fled violence in Sudan as refugees and were resettled here some years before. He was very respectful, smart, focused, mature beyond his years, and surprisingly funny. Quick-witted and clever, he was a truth-teller who cared deeply for his closest circle of friends. He enjoyed an especially strong bond with his sister Angwai, whom he often considered his twin (born 14 months apart!)

After graduating from La Jolla Country Day in 2020, he began an accelerated bachelor's program at UC Riverside this past fall that would have led him to medical school, where he dreamed to specialize in neuropharmacology. Fascinated by the brain, as early as middle school Michael began self-directed studies of anatomy.

While we struggle to imagine the world without Michael, we trust in God's goodness for his wellbeing in the life beyond the one we know, which is unquestionably dimmer without him in it.